Olivia in her Own Words…

“I was born in 1948 in Long Beach, California, but spent most of my childhood on the east coast. As a small child, I was provided pencils and paper to amuse myself. I would spend hours drawing my mother sleeping on the couch, mother dancing around the house, and in general the perils of being her. She was a disgruntled glamour-puss, and would entertain me with terrible imitations of Mae West, Garbo, Dietrich, Hepburn and Zsa Zsa Gabor. She was a cross between Sophia Loren, Lucille ball, and Rosie the Riveter. She was my muse.

My father was a freelance aeronautical engineer, and is a great, funny dad. He traveled from job to job, which made us move often. As an only child I was constantly thrust into new environments. I used my blossoming artistic talent to alienate new friends and teachers, using them constantly as subjects in sketches and portraits for classmates and neighbors.

I arrived in New York City in ’67 and went to The School of Visual Arts. I spent a few blurry years waitressing, and living in the Village, the Bowery, and Soho. I had a brief stint in the fine art world participating in a few lucky, incredible shows. All I could see ahead was a long hard road swimming upstream in the fine art world. Necessity demanded a new direction, and since I had always drawn women, I went to the men’s magazines to start what I thought was a temporary road, somehow along the way, I thrived and stayed.

I met my husband Joel in 1975, and two years later we began a greeting card business, ‘O Cards’, to publish my art. Joel and I married in ’79, and he has been the greatest influence and partner in my life. He has provided me with support and vision his vast collection of erotica and pin-up has been a pleasure to watch grow, and it’s fed me artistically over the years. we are inseparable. Joel is the silent partner, preferring to growl and grumble behind me.

I showed my new work at ‘Erotics Gallery’ in ’82 in New York, and then in the mid 80s began a 15 year relationship with the publisher/gallery Robert and Tamara Bane. I had fourteen one-woman shows through the years at their galleries, and they did many graphic editions. I also had shows in San Francisco, Tokyo, New York, and many other cities and galleries.

In ’93, Joel and I published the first of our five books, “Let Them Eat Cheesecake”, under our own imprint, Ozone Productions. We are no longer with the Tamara Bane Gallery, and we are currently publishing our own limited editions, which will be shown on our own on-line gallery as well as Bettie Page Las Vegas, among other venues to come.

While painting all these years, I had to keep an economic eye on what I created, but I was still able to flourish because of Joel’s publishing and licensing. I often felt ‘lost but driven’ through these years, but I’ve stayed with the theme of erotica, pin-up, glamour, and burlesque. So my art life has been variations on a theme.

Now, I am published each month in Playboy Magazine. Thanks to Hef’s generosity, and his position as “pinup genius”, I grace his pages and I get to partner with him creatively. I supply the images, he writes the captions. I see my career at this moment steeped in the joy of pin-up, and now I see Hef as my muse. He has launched many of the top sex icons of the last half century, and influenced the sexual attitudes of the last 50 years.

His creation of an empire based on the joy of sex was spurred on by images from his youth from the likes of Enoch Boles, George Petty, and Alberto Vargas. I’m trying to recreate the spark that lit his fire and keep my sensibilities as a woman. There are so many elements to doing great pin-up. I leave just as much on the floor as there is on the desk. It is all part of the process of being an artist, and one that I’m very grateful for. 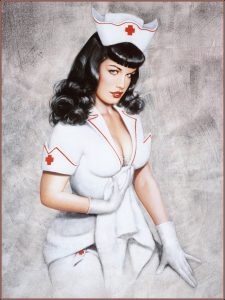 As the exclusive licensing agent for Olivia De Beradinis, CMG Worldwide is dedicated to maintaining and developing a positive brand image for our client. CMG is a leader and pioneer in its field, with over 35 years of experience arranging licensing agreements for hundreds of personalities and brands in various industries, including sports, entertainment, music, and more. We actively seek out commercial opportunities that are consistent with our brand positioning goals, and we are committed to pursuing strategies that meet the goals of our clients, as well as our licensing partners.